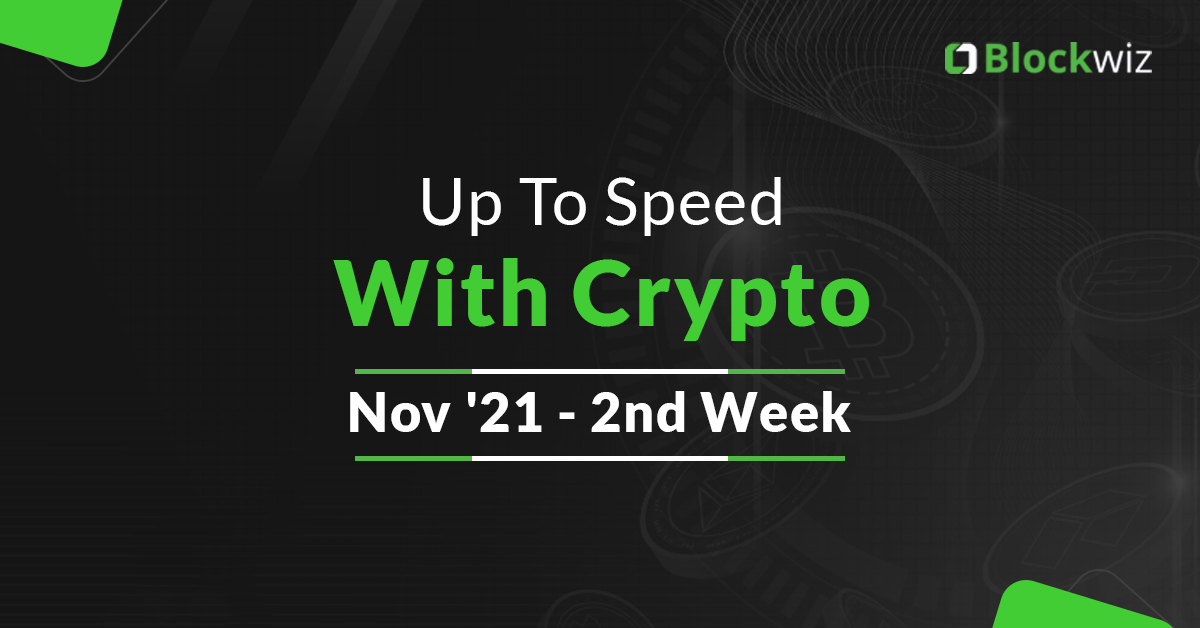 A new week has passed and we’re about to enter the weekend. As usual, a lot happened in the crypto world this week. Bitcoin reached its All-Time High (ATH), a Whale transferred 2,207 Bitcoins worth $147 million, AMC Entertainment all set to accept 4 cryptos from next month, and much more. The Crypto world is always full of excitement and we’re just as pumped up to cover the latest buzz around it.

Let’s just have a detailed look at the major things that happened this week.

Bitcoin price hits $69k for a brief period of time

On Wednesday, 10th November, the price of everyone’s loved Bitcoin (BTC) reached a new all-time high of $69,000. Trades began to exit the market shortly after reaching this new milestone, causing the price of bitcoin to plummet by about $7,000 and bring it below $63,000. Though it didn’t last long, the ATH gave BTC enthusiasts a lot to cheer about.

The present downward movement is certain to surprise some investors, but minor corrections following the achievement of new all-time highs are standard procedures for Bitcoin.

On the same day when BTC reached its ATH, an idle bitcoin wallet that was created on October 7, 2013, transmitted 2,207 so-called “sleeping bitcoins” worth approximately $147 million.

This whale activity is identical to the dormant address change that occurred in May 2021 with a wallet from the same year. The activity from bitcoins gained in 2013 saw re-distribution transfer at the time.

Vogue, a fashion and lifestyle magazine based in New York, and its Singapore-based subsidiary are venturing into the world of non-fungible token (NFT) collections. On November 10th, Vogue Singapore announced the debut of Vogue’s inaugural NFT collection, which will be up on OpenSea marketplace. Vogue Singapore’s team explains that the collection would include “two digital-only cover NFTs produced in partnership with local and international digital designers.”

Designed by the metaverse artist and Nike 3D designer, Chad Knight, in collaboration with Jamela Law and Lionel Wong of the Singapore-based design studio, Balf Design, one of the Vogue Singapore NFT covers is called the “Triumphant Awakening”. The second digital Vogue cover is titled “The Renaixance Rising,” and it was created to be a programmable NFT.

From next month, AMC Theatres will accept four cryptos

AMC Entertainment, the largest movie exhibition company in the US has provided an update on crypto acceptance. Their CEO, Adam Aron elaborated that ‘We are on track right now to accept, as we promised, Bitcoin, Ethereum, Litecoin, Bitcoin cash and others prior to year-end next month … We think we’ll be able to launch the acceptance of Dogecoin in the first quarter of ’22, just a few months from now.’

Before agreeing to adopt Dogecoin, the CEO ran a poll on Twitter to see if they wanted AMC to embrace the meme cryptocurrency. The result was so positive that the company decided to embrace DOGE right away.

Thanks to a partnership between restaurant major Landry’s and New York Digital Investment Group (NYDIG), millions of customers dining at 500 restaurants across the United States will soon be able to earn bitcoin points. Landry’s has also stated that it will purchase bitcoin for its treasury. “Bitcoin is a good alternative for a piece of our own treasury, and we want to provide our customers that option as well.”

Customers who sign up for the new bitcoin loyalty program will receive points that follow the value of bitcoin and may be redeemed in $25 increments based on the current market price of bitcoin.